North Manitou Island is a popular backpacking destination due to its easy access and being one of only a few designated wilderness areas in the Midwest.

There is however much to see and a quick weekend trip doesn't give you much time to really appreciate the island. There is much history, sights and so many North Manitou Island attractions - take some extra time if you can.

A reminder, when visiting the island, the ferry docks only long enough to drop you off and pick up returning backpackers. You must be prepared to camp at least one night.

As the ferry approaches the dock, the first buildings that you will notice will be the U.S. Life-Saving Service Complex.

Built in 1854, the Volunteer Rescue Station was the first of these buildings. Over the next forty-some years, additional building were erected to help support life-saving efforts along the Manitou Passage. 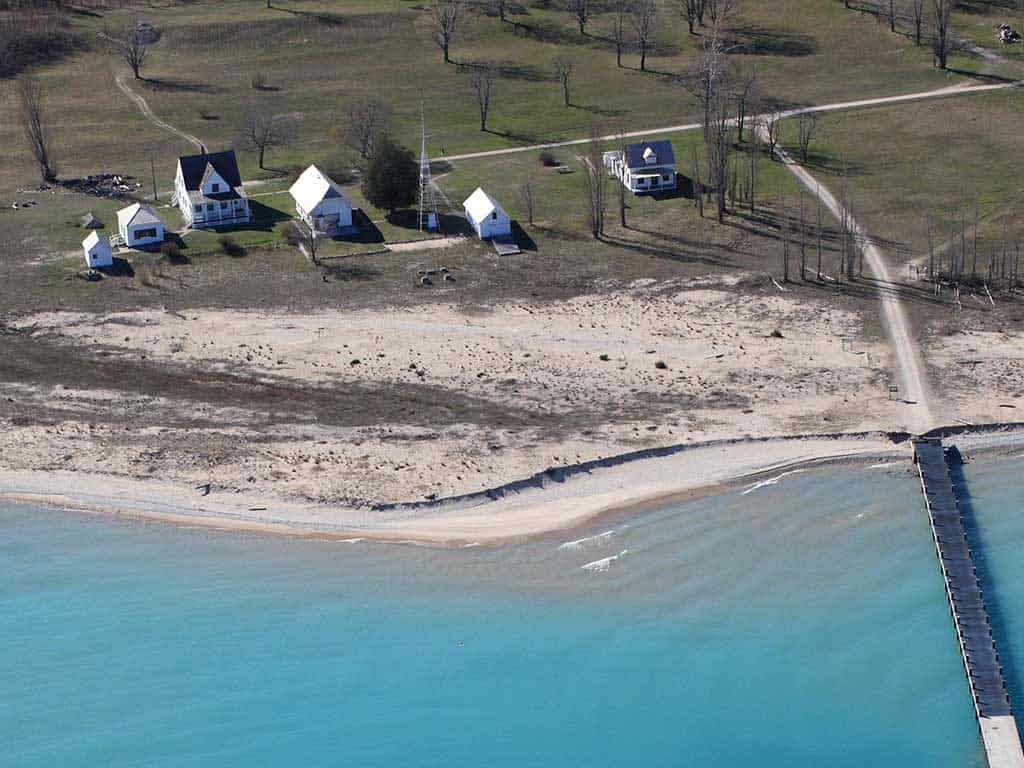 Sitting back from the U.S. Life-Saving Service Complex, is a series of buildings known as Cottage Row. These were built primarily between 1893 and 1924. These buildings were part of a resort development developed by Frederick Trude, George Blossom, and Silas Boardman. All but one of these are owned by the National Park Service.

The only organized campground on North Manitou and the only place where an open fire is permitted. Just a half mile hike from the ferry dock, the Village Campground is an easy hike, especially for those who want an easy first or last day on the island.

Open fires are permitted here but only in the provided fire rings. A latrine is located on the north edge of the campground. The closest water source is either the hand pump in the Village or Lake Michigan is accessible by a few small trails leading off the main trail.

Camp sites are first come, first served but except during peak times like Memorial Day or Fourth of July weekends, sites are generally available. Most sites have enough room for more than one tent so sharing a campsite is an option.

Named for, not the Donner of cannibalism fame but rather, Nazaros Dona. Nazaros Dona was a French trapper who settled on North Manitou Island sometime after 1844. He is said to be buried on the point that was named for him but is now misspelled.

Between the forest and the beach lies a series of dunes. This area has a very remote feel to it. The dunes are tall enough in places that they completely obscure your view of both the Lake Michigan and forest. Reminders of civilization do linger. Remains of telephone poles can be found standing just inside the first set of dunes. Some of them are almost completely buried in the sand.

Donner’s Point would be your best choice for a landing spot if you were to kayak from the mainland or from South Manitou. It has a gently sloped sandy beach and is seven miles from Pyramid Point on the mainland, and four miles from Gull Point on South Manitou. Only well-prepared and experienced paddlers should attempt either crossing!

Camping here will likely mean setting up camp in the dunes in order to remain more than 300 feet from water as required by the National Park Service. This means your campsite will exposed to the sun with little if any shade. I would recommend this only for the coolest and cloudiest of weather. Should you camp here, your best locations will be between the Cable Box and Donners’s Point.

To the east of the point and before Dimmick’s Point lies and area known as The Big Windfall. This area is a steep dunescape that while beautiful, doesn’t offer much in camping and is very exposed.

Despite not being the ideal camping location, Dona’s Point is indeed beautiful and worth visiting.

Dimmick’s Point is located at the southeast area of the island. A lighthouse was in service here from 1898 until 1935. The lighthouse is no longer here but is now home to Piping Plovers.

Piping Plovers are an endangered species and because of the Piping Plover’s nesting season, Dimmick’s Point area is closed to hikers from May 1 through August 15 of each year.

I suggest camping along the shoreline between the point and the Old Stormer Docks. Here you will find an amazing view of the Sleeping Bear Dunes. While the wind tends to come from the west or southwest, this area usually has a breeze that helps keep flies and mosquitoes away. Easy access to the lake provides your water source.

This is a great location to set up a base camp from and explore the southern part of the island. Many ruins are nearby. Within a short distance are the old Bourniques cabin, and the Anderson and Feilen homestead ruins. Further to the west lie the Stormer Place and Anderson Place. It should be noted that it is against park rules to enter any buildings or ruins on the island. 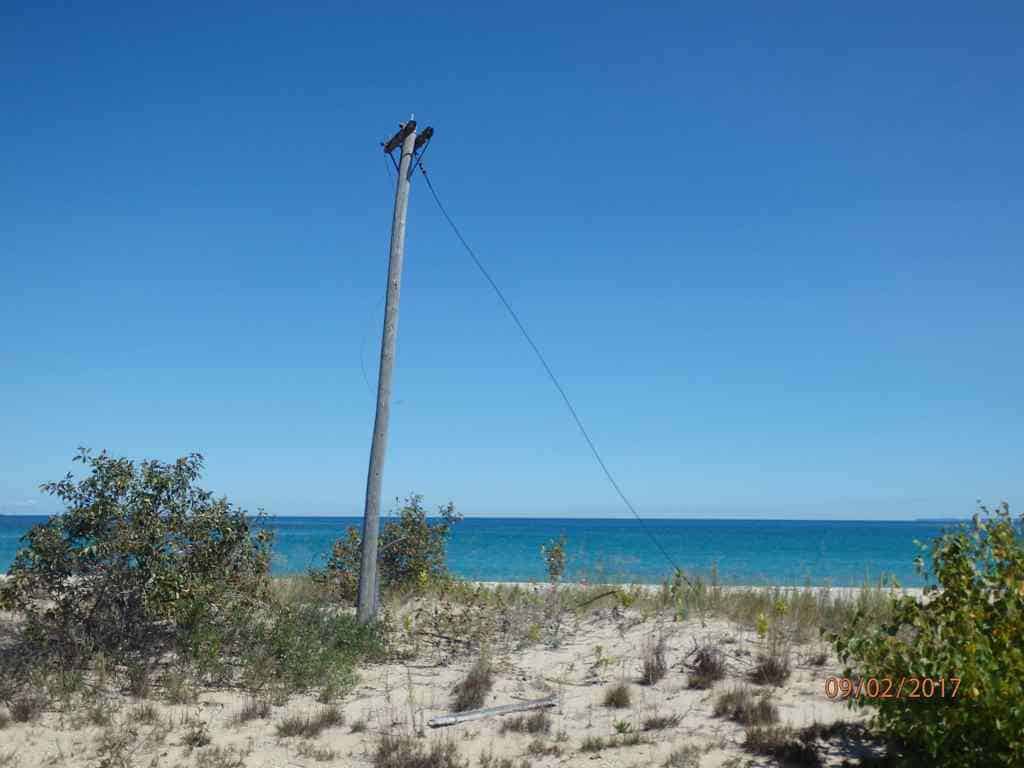 If you visit later in the season when Dimmick's Point is open, venture all the way down to the point itself and you'll discover ruins of the lighthouse.  These can be challenging to find but your first clue will be a series of telephone poles that supplied power to the lighthouse and the lighthouse keeper's home.

As of September 2017, you could see the sparse remains of the home. Really all that remains are scattered timbers and siding from the home. Nearby, more remains can be found scattered in the dunes. Hardware and household items are buried in the shifting sands. I would assume that each year the visibility of these will vary. 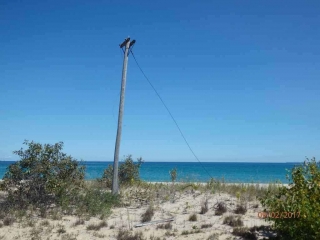 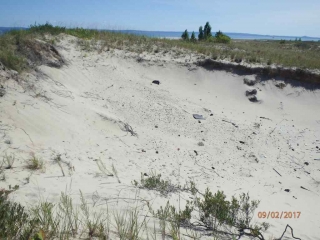 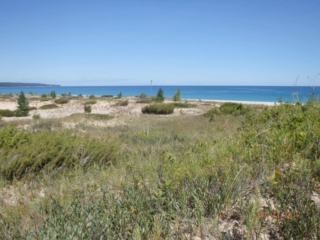 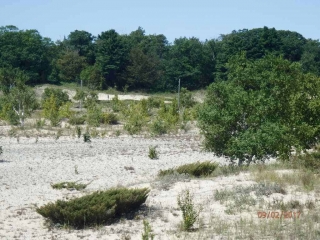 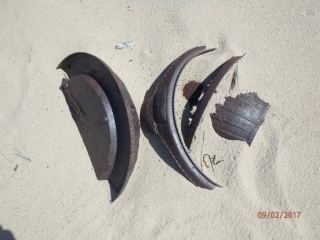 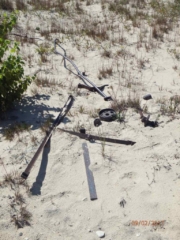 Located about one quarter mile off the main trail, the cemetery dates back to 1895. It is an interesting location nestled on a gently rolling plot with a fence surrounding it. Please be respectful of the dead and their families. Gravestones are mostly old grave markers along with a few modern gravestones. The most recent burial appears to be in 2011. 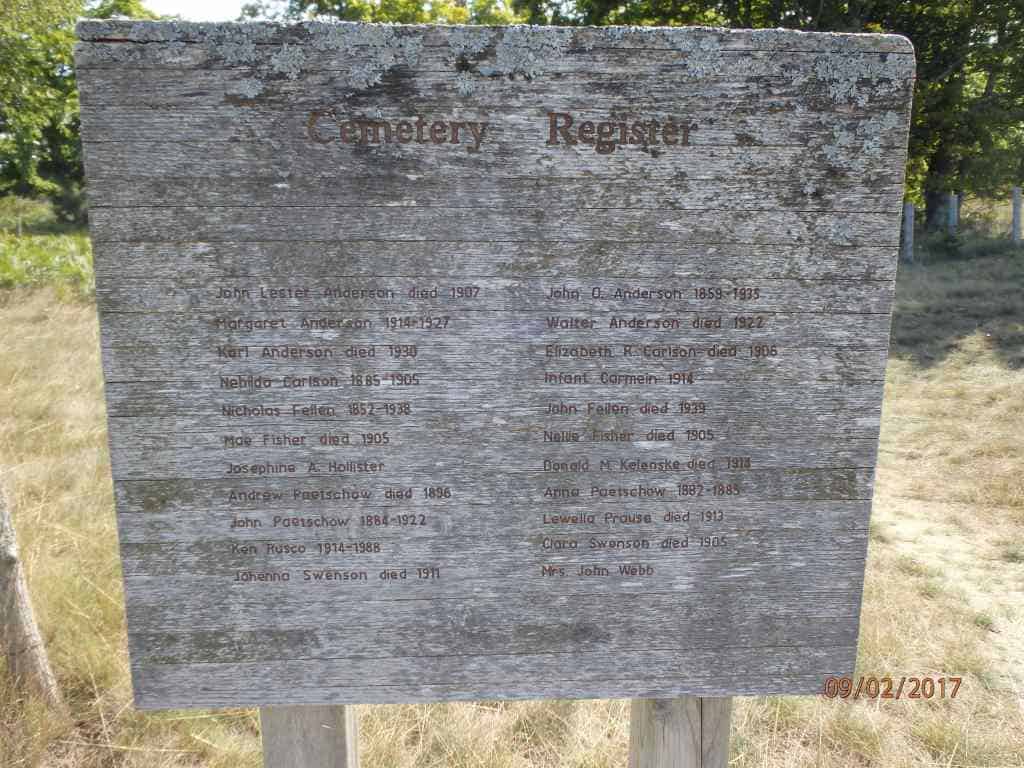 As of  my last visit in September  2017, only the clearings remain.  I could find no visible trace of the buildings.

On your way to the southern end of the island from the ferry dock,  you will likely have hiked past Cottage Row which includes the Burdick House ruins. The before and after photos show a stark contrast on how time has taken its toll.

Very little remains of Fat Annie's. The clearing and farm field has become mostly overtaken by the forest. Remains of the house foundation are mostly hidden by brush.

Located on the south-west side of the island, about a half-mile north of the cable box. The Fredrickson home was abandoned when the family moved away sometime before World War II. The house is said to have been victim of of erosion and slid down the bluff. The waves of Lake Michigan finished the job.

Located on the south-west side of the island.  If you look carefully, you may find remnants of old apple and pear orchards. Lilac bushes mark the location of where the old homestead once stood.

The former site of what was the islands largest settlement. In the early 1900’s, Crescent City was home to 300 residents. This was a bustling lumber town that faded away when the lumber industry collapsed.

Also known as the West Side Barn, this is one of the few remaining buildings besides Bournique's Place and Cottage Row. Located just South of Crescent City, the barn  is posthumously named for farmer Swenson who worked the nearby fields, the barn itself was built in the 1920’s.

This is the remaining railroad bed, off the Smith and Hull Lumber Company railroad that extended about six miles from the Crescent City docks to the forests on the North side of the island.

Rarely seen as access is difficult due to terrain and overgrown trails. These glacial kettles are on the extreme northwest edge of the island. They lie amid the most rugged terrain of the island. They are just below the highest point of the island. There is no official trail although you can find evidence of older trails that are mostly overgrown. One of the potholes has eroded enough to create a blowout to Lake Michigan. A spur of the Old Grade leads toward them as well.

A small clearing that was once the site of the Davenport Lumber operation. This lies along the Old Grade near the intersection of an old road that passed along the west side of Lake Manitou. This road is becoming increasingly difficult to locate and follow.

A trail that leads to the Pot Holes is close by.

A graveyard of abandoned logging trucks litter the woods along the south side of the trail. Remnants of the old timber industry are scattered in interesting piles and positions that make you wonder exactly how they found their way to their final resting place. Scattered in the ruins are bits and pieces of the old narrow-gauge railroad.

The actual camp is the clearing on the north side of the trail. This was the location of at least three logging camps. The Stormer operation is believed to have ceased operation around 1926. The abandoned trucks are remnants of the Merle Day-Peter Jurica lumber business that operated from 1956 until 1978. 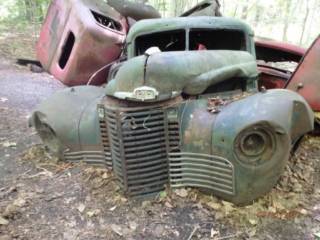 A lake on an island in a lake! This is a popular destination for those looking to do some backcountry fishing.  Small Mouth Bass are abundant. It’s also a great campsite location as it has scenic views and easy access to water. 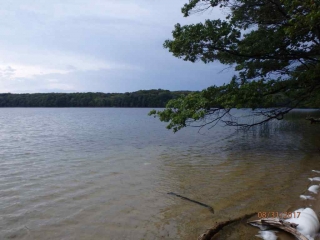 
Just a wooden pole bridge that crosses the outlet from Lake Manitou. The outlet flows north-east to Lake Michigan near the Maleski homesteads.

Along the south side of the trail, between the Stormer Camp and the Pole Bridge, you’ll find a fence enclosure that was built to keep deer out and to study the effects their foraging on the island ecology.

The Maleski family homestead was established around the mid 1870’s by Adam Maleski. Adam had worked as a woodchopper on the island for several years before taking up permanent residence.

As the family grew, they built additional homes and buildings. The Maleski family made North Manitou Island their home for three generations and were the last property owners to surrender their property to the National Park Service.

Paul Maleski’s homestead is about a quarter of a mile from the trail marker. A large clearing is still visible, although I could find no evidence of any remaining buildings on my last visit. Blackberries however are abundant!

The John Maleski homestead is located near the Lake Michigan shore about three-quarters of a mile from the Paul Maleski clearing. Only a few scattered timbers are visible. 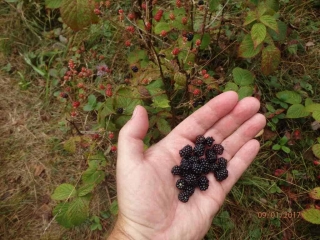 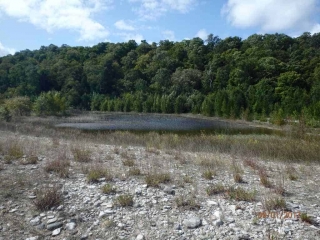 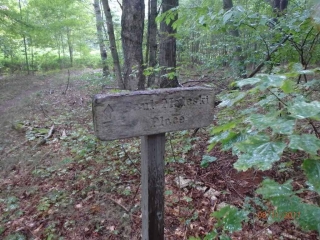 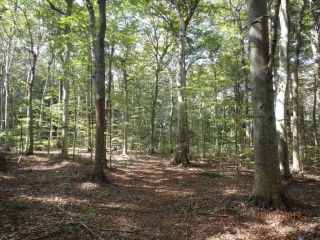 Located on the North-east shoreline about one mile from the Village Campground. It rumored to be where outlaws would place lanterns at night to lure ships to run aground and loot the cargo. Today it is a peaceful and scenic overlook that makes for a nice campsite or place to rest while hiking to the John Maleski homestead.

Did you enjoy this post or find it helpful? If so, please support our blog!
We write this blog because we love the outdoors. But we also need to earn a living, so we REALLY would appreciate if you click through to one of our reputable affiliates for your online shopping. For your outdoor shopping needs, we are also affiliated with Amazon, Jenson, REI, NRS, and Nashbar. When you buy from our affiliates, we make a small commission, and this is the only way we earn any income. Plus, it costs you nothing at all - a real win/win!

Solitudesports.com is a participant in the Amazon Services LLC Associates Program, an affiliate advertising program designed to provide a means for sites to earn advertising fees by advertising and linking to amazon.com